It’s a new year, a new blog, well ok, maybe I’m just using a different font on the blog but it’s hot, so off you go have a shower and cool down…I’ll wait, but not forever, only fleetingly…you have to admit it’s more romantic that way. 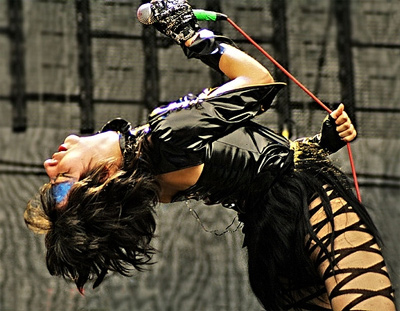 Now before I sat down and decided on that font change (and trust me that was as a hard a decision as whether or not to throw out my Leona Edmiston tights because they kept falling down and I couldn’t justify wearing my undies on the outside of them anymore just to hold them up), I was at a summer music festival kicking back with the kids (well people predominantly born in the 80s) and as much as I’d like to admit I went with my surfer buddies armed with our date rape drug of choice and St Tropez tan accelerator I was actually there for work – drunk, ambiguously consensual he-said, she-said group sex would have to be on hold for the festive season.(… and that’s why children I don’t believe in Santa Claus).

After very limited and ill considered conversation by my director along the lines of:

‘But I have artisitic credibility’

…it was decided that it would be cute to film me trying to stalk Karen O of the Yeah, Yeah, Yeah’s – a band I was dying to see, but preferrably not while being led away with handcuffs.

It’s not that I didn’t kinda like the idea of following Karen O around for a few days, trying to get her to notice me where maybe she’d catch my eye as we both ordered another plate of Gado Gado in the dining tent and both laughed that there was such a thing as too much satay, it was more the fact I’m completely rubbish at stalking, it feeds into a deep seeded insecurity from high school. I knew my best friend was friending someone else on the side. When I confronted her of course she denied it, so I decided to follow her – the problem is it’s rather hard to stalk someone at the local swimming pool incognito when you have only just learnt to swim again after having tubes in your ears for 4 years and as such are surrounded by flotation devices and still manage to nearly drown in the wading pool and the cute life guard has to rescue you, arse in the air as your best friend yells from the other side of the pool

‘Are you stalking me Lou?’

‘…yes, yes I am and I think some kid just urinated in here, and I’m pretty sure I got some in my mouth…’

‘I don’t think we should be friends anymore’

So aware of my shortcoming’s as a stalker I asked around:

‘I tried stalking once, but ended up being charged and it just left a bad taste in my mouth after that’ bemoaned a random stranger stabbing his dinner next to me one night.

‘Yeah, I can see how that might dampen the whole experience’

‘I didn’t think she’d take it so seriously, it’s not like the window wasn’t already open. You want anything from the bar?’

‘Um, no thanks, trying not to drink around repeat offenders, bit of a New Year’s resolution.’ I joked as I edged my self closer to the cute boy seated to the other side of me, but it would appear that the only difference between him and the guy one might describe to a judge as a ‘perpretrator’ was he just had never been caught.

‘It’s all about electronic stalking and getting the right software to erase your IP address. You gotta be smart about these things, otherwise it goes from being romantic to downright scary.’

His other advice involved:

1. Breaking the lock of their door by filling it with blu tak so as to make it easier to open when they weren’t at home and then smelling something of theirs.

2. Climbing a tree outside their home, but make sure they don’t see you. You want them  to feel someone’s presence, enough to make the hair on the back of their neck stand on, but not enough for them to call the police.

3. Hiring someone to do it because you can’t be everywhere at once and  the thing about stalking is consistancy, you need to be consistant.

Great,  so cute guy was not only romantic but also a little bit scary…well I could break that new years resolution later. A  girlfriend of mine justified his explanations by citing that his parents met via stalking – ah, well if it’s a family tradition…and as for my friend there was no use in asking her for advice because here was a woman that stalked her current beau to the point she sent him anonymous messages, flyered their neighbourhood with declarations of her love for him and made a film about the whole thing – me Googling Karen O paled in comparisons to the lengths those around me had gone to to get someone to notice them.

What didn’t help was that she wasn’t due to arrive until about an hour before her set, so I spent the days leading up asking around after her, getting free juice off the boys that ran the juice stand, molesting the VIP bus driver for information and being forced on a ferris wheel(with the lady who ran it telling me to grow a pair as I trepidatiously stepped on board) regardless of my fear of heights to see whether or not her helicopter had arrived yet, being caught pretending to break into her house and using the word strap-on straight to camera more than was probably necessary at the time and building a shrine of Ms O near our camping spot – in short it was 56 hours of humiliating myself for a joke that at this stage was more set-up then punchline.

And then finally she arrived and with her arrival came the declaration that no one was allowed near her. I was relieved, I’d never actually planned on meeting Ms O, in fact the joke rested on my inability to meet her and so now I could just sit back and enjoy her concert, well just before I was told I was going to have to climb a fence into the mosh pit armed with a sign that read ‘Karen O be my best friend and maybe something more’…yep, I wasn’t quite done with my destroying my career quite yet.

My friend handed me her scotch filled hip flask and with dutch courage I headed out into the 16, 000 strong crowd, well me behind a barrier with water pistol armed security and some delightful boys behind me miming me giving them blow jobs straight to camera – such is the burden of fame I’ve been told. If that wasn’t enough, a segment I’d shot then went to air…

‘Is that you?’ a regular looking cockspanker next me asked.

And with that confirmed he tossed a bottle at my face.

‘No’ I told him, but of course Isaid that without taking into consideration that only moments later  a renegade beach ball would hit me in the eye and it was then I burst into tears – I like to choose my moments – a bottle in the eye doesn’t make me cry, but soft beach toys…

Running away to the toilets I found my hip flask friend and got drunk on the steps of the VIP toilets, at one point drawing the attention of a local Melbourne muscian who told me that some woman had licked him that day when she realised who he was…’so you see Lou there are cockspankers everywhere.’ He was right, I needed to get my dignity back and the only way to do that was to go and watch Ms O on stage, strutting her confident gold…the only problem was I’d gotten so drunk I’d missed the concert – I was losing my patience with 2009 fast.

Feeling a little ill I headed off into the bathroom only to turn around and realise I was face-to-face with a sweat covered woman – Karen O.

‘Hi’ she beamed at me as she adjusted her hair in the mirror.

‘Yep, I’m fine’ I mumbled back (please don’t light a match around me Ms O, I’ll kill us both)

‘Did you enjoy the concert?’

This was my opporunity to get my dignity back, to finally get the front foot…and so I said the only thing I could say.

‘You sure?’ asked a perplexed Ms O

‘Yeah, totally, I have heaps of posters of you…I even have a shrine of you up here with me so I’m sorted.’

‘Ok’ and with that Ms O, or Kazza as I like to now call her walked away from me and to be honest I would’ve walked away from me too and sure I might’ve misplaced my dignity that day and ruined any chance ever of being Facebook friends with Ms O but I got something better than that – I’d successfully (albeit incidentally) stalked Karen O and so I smiled to my make-up smeared, scotch soaked self with toilet paper stuck in my shoe reflection and hi-fived it.

Surely I was the winner here? and now to make the bold decision…whether or not to throw out those tights as I could feel my undies rolling down again…