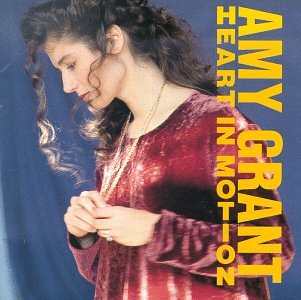 There are some albums that shape us for life, reflect the people we are and perhaps more importantly the people we hope to become. The first album I ever bought myself was of course Amy Grant’s Heart in Motion and it is at this point I feel the need to point out that I didn’t know she was a Christian, nor did I know that the ‘baby, baby’ in her life was God, nor did I know she was and is still is to this day the best selling Christian music artist of all time. Had I known this I would never have begged my mother to take me to see her live in concert when she came to tour Australia in 1991. I’ve blocked out most of the experience but what I can manage to drag up with the aid of codeine and a late night Shiraz was that the concert was held at the newly built tennis centre and as I walked up the path with my brand new hyper colour t-shirt on and crimped hair I failed to notice the large banners that read ‘God is my baby too’, but that’s what my mother was for. ‘All these signs, such a waste of perfectly good cardboard.’ I watched as she rolled another cigarette and adjusted her bra outside the ticket booth. ‘They’re just excited’ I grinned, clutching my packed Prima close to me. ‘Excitement is for people that have sex, you’d do best to remember that Louise.’ (And yes, before you ask of course that comment scarred me for life). The rest of the evening played out with my mother arguing with ushers over the fact the concert was a dry event and yes she knew that, ‘that’s why I bought my own’ as she proudly pulled out a box of goon ’cause I’m not stupid, I wouldn’t bring glass knowing they’d be kids here’ – of course they confiscated her alcohol and as such she spent the rest of the concert in grimaced resentment, kicking the back of the chair in front and remarking ‘well if God really existed he’d stop me from kicking your chair’ when she was finally confronted by a pimply faced 14 year old boy and his 200 kilo minder – Barry from the abandoned kids centre. Twenty minutes in we left, after Amy tried to lead us in a group prayer resulting in my mum standing up and declaring that if my father couldn’t convince her to give group activities a go there was no way she was going to be persuaded by a bunch of ‘god f****’s….’…and so with that we left and as we stepped out into the early evening away from god’s warm embrace my mother turned to me, lit another cigarette and said ‘so Lou, see what happens when you get what you want, might teach you to stop asking for things.’She was right, every time I asked for something things had a way of going bad, none more so as when I asked for the Sesame Street Album. I was 4 years old and had for some time been a massive fan of the ‘street’- to say it provided me with the moral compass my family failed to would be not to give it enough credit. It was an album that encouraged love and unity, compassion and growth – my mother was obviously reluctant to buy it for me as it promised nothing but false hope she said.

Just before my 5th birthday my Nan suggested me and my mother accompany her on a weekend away in the country – nothing fancy, just take in the sites from bed and breakfasts and gorge ourselves on scones. As it was the middle of summer the car ride was long and sticky and so my Nan suggested a shower for me before we hit the town to find that perfect iconic slogan driven tea towel that we could not return to civilisation without. As my Nan dried me off she let out an odd sigh ‘oh that doesn’t look good.’ She was looking at a small pimple on my chest that I had recently named Hector only because it seemed to be getting bigger and bigger on a daily basis. She called my mum into the bathroom and I watched as they both stood back and examined my small naked frame and my little lump called Hector. ‘Could be the leukaemia’ my Nan suggested ‘yep, best we go get her checked then.’ my mum concurred ‘better grab some plastic sheeting’ my Nan yelled ’cause if it is the leukaemia she could wet herself and I just had the backseat Scotchguarded.’

We drove to a little local clinic and as luck would have it I exercised great control and didn’t wet myself. The waiting room was what you’d expect in a small country town, small and dingy, with magazines declaring that Edward VIII would be abdicating the throne any day now for someone called Wallis. Finally a nurse came out and taking my hand led me to the doctor’s room, telling my mother that maybe if she went and bought me some candy that might make everything better. ‘I doubt it’ my mother mumbled under her breath as she grabbed her handbag. My Nan followed me to the doctor’s room but again the nurse interrupted asking for my Medicare papers. Nan had left them in the car and said she’d be right back, but not to go in without her – the nurse ignored her and given I’d seen my mum ignore my Nan so many times I didn’t know much better so I too ignored my nan’s comment. Now to be honest what happened after I was left with the doctor and the nurse isn’t for the faint hearted and looking back could’ve all been avoided had anyone managed to notice that not at any point in the doctors waiting room did we see evidence that another patient had passed through there in say, I don’t know….20 years!

The doctor seemed nice enough, and as usual his hands were cold, he rubbed them on his bald head to warm them up – something I found more amusing then disturbing. He placed me up on the bed and asked me what was wrong. I told him that my friend Hector was causing my mum and Nan some concern and he took a quick glance at it and admitted that yes, they were right, it could be the leukaemia. He asked me to lie down and then the lovely nurse suddenly held down my arms and the doctor returned with a bobby pin and before I knew what was happening he pierced down through my nipple, peeling back the flesh and yes, that’s when I past out.

By the time I came to I was in a proper hospital, complete with blinking machines and doctors who appeared to be wearing stethoscopes and had the air of having had a medical education – all things that small clinic doctor lacked in hindsight.

The story went that my Nan had come back from the car and having found the door to the clinic locked and using her body weight, flung herself against the door and broke it down. The doctor had peeled a fair amount of skin from my chest away and I was on the verge of going into shock as my Nan picked me up and ran to try and get me to a hospital before I went into cardiac arrest. My mum returned moments later with my candy but was a quick thinker and put it back in her handbag to perhaps save for later

now was not the time.After the trauma of having met with Dr Zhivago my mother who was more concerned with not getting another visit from child welfare presented me with a copy of the Sesame Street album. It was mine to keep she assured me, as I stared down at the bandages now covering my chest that somehow how gave me a modesty I’d lacked earlier in the day. It turned out the doctor was from the old school of ‘chop it off’, not the more popularly favoured ‘considered diagnosis and penicillin’ school of thought. He apologised, but someone thought it was best to charge him with malpractice regardless.
Arriving home I tore into the lounge room to listen to my new album when my mother stopped me and asked me what I thought I was doing ‘…oh no you’re not’ she said ‘I’m going to watch Magnum PI and then your father and I are going to watch Thornbirds.’

My face sank ‘…but…’ but my mother was uncompromising. ‘Look Louise don’t you start making me feel guilty for the whole you were operated on by a doctor in third world conditions thing…there are song lyrics on the back, just go sit in your room and imagine the music, albums aren’t just for listening to you know.’

And so I took my album to my room and yes I tried to sing along with the imagined lyrics in my head but without Hector it wasn’t the same, nothing was ever the same without Hector…ever again and perhaps I’d learnt sooner then I’d ever cared to imagine that bad things happen when you ask for things

‘A Letter to the photo I never wanted taken.’ (published in ‘Sincerely’ – Woman of Letters compilation by Penguin Publishing)

I’d prefer a gift voucher over you for Christmas, no offence.